Today we’ll be launching our third major update for the Command & Conquer Remastered Collection. As I described in my post last week here, we feel this patch will have achieved the vision we had for the game when we first started development. As such, we wanted to let the community know we anticipate this will be the last patch for the game. The goal for this patch was to deliver some final touches we had originally envisioned for the player experience, and further position the game for the community to have the resources available to make enhancements in the long-term.

Below you will find the key improvements in this update along with the detailed full list of Patch Notes.

As requested by the community since launch, this update includes key information now displayed on the loading screen for Multiplayer and Skirmish games. The loading screen will display the Minimap, your starting location, and the players in the match. We hope this improvement helps orient players when they start a match, plan their opening strategy, and get a sense of who they’re facing off against in Quickmatch games.

We’ve added a Beacon system so teammates can ping each other during the course of a match. Players can place a Beacon by tapping the new button above the minimap or using the associated hotkey. Each player can have one Beacon placed at a time, and the latest placed Beacon will last 30 seconds.

We’ve officially added 6 player support for Tiberian Dawn Skirmishes and Multiplayer. Maps which previously supported greater than 4 starting locations are eligible for the new player count, which should carry over into User Maps as well. Some of our community members have also expressed an eagerness of trying to mod larger map sizes and up to 8 player games with the new code built into this patch.

A new tab has been added to the Replays / Observer menu for “Local Replays”. This will display all the replays you have present in your local replays folder and allow you to play the replays while offline. This should provide a viable flow for players to host / share replays within the community and view them long into the future.

As you may have seen last week, the Map Editor has now been released under the GPL version 3.0 license. In addition to being available on Github, this patch provides the code in the local install folder alongside the TiberianDawn.dll and RedAlert.dll files.

Once we have confirmed the stability of the patch release, we will be resetting the ladder in both games. This time around, we will also be resetting each player’s Matchmaking Rating, which should effectively set everyone back to pre-launch status. We are also rolling back the Matchmaking search range and timings to the June launch settings. We hope these changes provide for a better Quickmatch experience in Season 3. Again, this reset will likely happen in the next few days.

I’ll then reiterate this message from our previous Patch Notes. Because this patch includes updates to the TiberianDawn.dll and RedAlert.dll files, it’s likely that some previous mods will no longer be compatible with this updated version of the game. Modders will need to update their mods with the latest code and refresh their mods on the Steam Workshop.

Once a mod has been updated on the Steam Workshop, players will need to follow a few steps to update and reactivate their mods:

Players may experience some issues if they try to activate mods which are not updated to the patch version.

With those items in mind, please see below for all the updates made in this patch:

We hope this update improves your experience with the Command & Conquer Remastered Collection. Thanks for your ongoing support over the course of the project, and we look forward to seeing what the community continues to create in the months and years ahead.

This announcement and roadmap may change as we listen to community feedback and continue developing and evolving our Live Service & Content. We will always strive to keep our community as informed as possible.” 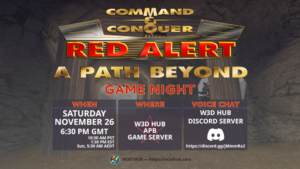