Hi Joe,
I’am very grateful that you have agreed for an interview with me. I represent one of the biggest Polish sites about C&C; and other Westwood Games (www.imperium-ww.pl). It is the only site in Poland that also deals with other Westwood games – not only C&C.; Apart from that there is a strong faction of Nod sympathizers on our forums :). The site is mainly in Polish, but we’re translating it 🙂

We’d like to ask you a few questions about your life and work
1. If we may know – where and when have you been born?

2. Where are you currently working?
I have a very demanding and important job with an international culinary franchise. Frequently, customers will forget to order fries and it’s my job to gently remind them by saying: „would you like fries with that?” or „how about some fries to go along with that?” or „do you realize that you’ve completely forgotten to order fries?” It’s very rewarding and I can’t believe that I spent the last eight years of my life working in an industry that didn’t hardly involve fries at all.

3. What do you do in your free time?
I am a USHGA-rated P3 paraglider pilot and outdoor enthusiast (hiking, camping, fishing) and so I spend most of my free time watching television.

4. What are your hobbies?
I collect antiques, walking sticks and antique walking sticks. I try to eat as much chocolate as possible.

5. What is your favorite computer game (except C&C;) ?
I got pretty immersed in the „Thief” games – I was impressed with the twist they managed to put on the first-person shooter.

6. When did you get your first computer?
My brother Mike bought a Commodore VIC-20 when it first came out back in 1980. He tried to teach me how to program it but I was too damn dumb (although I discovered that if you dropped it from a height of about 6 inches, it was really useful for cracking open walnuts.). I’ve never really owned a computer myself. My first 5 years at Westwood went like this: ME: „Hey Ted! How do I turn this damned thing on?” TED MORRIS: (sighing heavily) „We went over this yesterday. And the day before. Push the blue button you jackass.”

7. Who did you want to be when you were a kid?
When I was a kid, I wanted to be Gene Kelly. That guy had it all: style, grace, humor and charm. Plus, he got to do a lot of smooching with Leslie Caron. ctually, I’d still like to be him, without the „being dead” part.

9. What kind of music do you listen to?
Mostly Chinese opera although just lately I’ve been enjoying a lot of Irish folk music. How many Las Vegas lounges host Chinese opera groups? Well I’ll tell you: not as many as you’d expect!

10. Do you confirm rumors about your leaving Westwood Studios when EA
disbanded it ? And how long did you work for Westwood ?
Yes, I confirm those rumors. I confirm those rumors as often as possible. Westwood laid me off on March 19, 2002 about a year before the studio was disbanded. It was not the sort of birthday gift I had expected; at the time of my dismissal I had worked for Westwood for a little more than 8 years.

11. What do you think about EA’s decision to dissolve Las Vegas division?
I think that EA is a gigantic international corporation with its eye fixed firmly on the bottom line. Their stock recently closed right up around $80 a share. You do the math.

12. How did you come to work for Westwood Studios ?
I usually came to work by car (1992 Saab Turbo convertible) or, sometimes, by bus. Once, when the car was in the shop, Brett Sperry let me ride in the back of the pickup.

13. How it was to make FMVs with stars such as Michael Biehn or James Earl
Jones?
It was a little slice of heaven right here on Earth! Stars like Michael Biehn and James Earl Jones are much, much different from you and me, don’t let anybody tell you otherwise. For example, Michael traveled with a large, pressurized aqualung because he could only breathe air that had been imported from the French Alps. Mr. Jones is actually an animatronic robot owned and operated by Lucas Arts. Not a lot of people know that.

14. Do you still work on C&C; series – now with EA ?
No, as of now EA has not asked me to be involved in the continuation of the C&C; series. This is strange because I’ve made it absolutely clear that I’d be willing to work for free.

15. What did a 'normal’ day of work at Westwood look like and what was the
atmosphere there?
Westwood was a cavern of despair and hopelessness. Each day was more depressing than the last. The halls were kept dark and were crawling with spiders and scorpions. More than a few designers were found dead in their offices, faces frozen in paroxysms of agony. Electrical power was derived from generators hooked up to bicycle pedals hidden under the desks – everyone was forced to pedal for up to 10 hours a day, although you would get a break once a week when you were taken away for your Wednesday morale beating.

16. Which C&C; game is your personal favorite?
The first C&C; is still my favorite, although I really thought that Renegade added an interesting new perspective to the series. The fact that the two storylines happen concurrently is pretty intriguing.

17. Which C&C; character is your favorite? (of course except Kane 😉 )
That Tanya chick sure has a cute butt…

18. How did you come to place the Brotherhood of Nod in the game and how did you become Brotherhood’s charismatic leader instead of being a GDI
officer?
„The Brotherhood of Nod” was an invention of original C&C; designer Eydie Laramore. She and I spent hours discussing biblical metaphor and imagined backstory. I was originally meant to play General Sheppard, but I couldn’t say „Good job with the beach-head” with a straight face.

19. Which character that you have played in the C&C; FMVs is your favorite?
I play the black-suited commando character that takes out a guard (played by Frank Klepacki!) in „Red Alert” – I think that guy’s my favorite. Even though he’s only on screen for about a second and a half, I created a rich and detailed backstory that motivated his every move – he was married to a chemistry professor and lived in a small Colonial-style house with their 2 children, twin girls named Nancy and Darla. If you watch carefully, you can see that he moves with a slight limp – the result of an old college Lacrosse injury. His favorite color was yellow, favorite food was pork chops, and he collected baseball cards from the 1970’s. I was really hoping that the fans would notice such attention to detail and demand that character get his own spin-off game. No such luck.

20. And the usual question that is asked by probably every C&C; site: Will there be Tiberian Twilight? Or any other continuation of Tiberian Series or Red Alert Series…
I don’t know — I don’t work there anymore.

Thanks again. and your time. 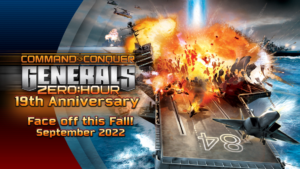